The correction of malocclusion at children 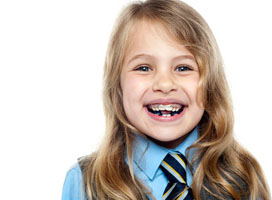 The problem with occlusion is a very spread problem. The main cause of malocclusion is the late extraction of the milk teeth.

Except these two problems (mastication and pronunciation) because of malocclusions can appear esthetical problems in time.

There are some methods to correct the malocclusions. One of the most spread method is dental braces and removable plates.

Removable plates are made from metallic frame which is set on the maxillary on a plastic prop adjacent to the palate of oral cavity. These plates are very workable because they can be taken out during brushing the teeth, sleeping and having meal. It is very well because the small rest from food will not get into the metal part of plate. But these plates are very sensible and if we take it off a lot of times they will get out of shape and lose from its effect.

Wearing braces is a long process it can take some years. But at the moment it is the best method and the most efficient way to correct malocclusion.

The malocclusion is very important to correct in childhood for a good pronunciation and for a nice look.